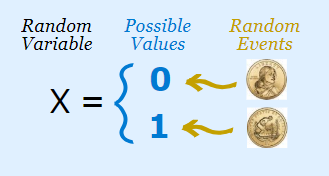 A Random Variable is any rule that maps (links) a number with each outcome in sample space S.

Mathematically, random variable is a function with Sample Space as the domain. It’s range is the set of Real Numbers.

Ex : X = x means X is the Random Variable and x is an instance of X.

When a person calls a customer care hotline of a bank, an operator might pick up immediately (Success – S) or that person might be put on hold by the operator for a while (Failure – F).

When a random variable has only two possible values 0 & 1 is called a Bernoulli Random Variable.

In a particular exam, students are considered as Pass if the score is over 75% & fail if otherwise. For this scenario, we can define a Random Variable as follows;

In some experiments, we can define several random variables.

Consider an experiment where a coin is tossed until a head turns upwards.

X = no of times coins is tossed before a head turn upwards.

Random Variables are a very essential concept in the study of Statistics and Probability. In our next tutorials, we will study probability distributions related to Discrete Random Variables.